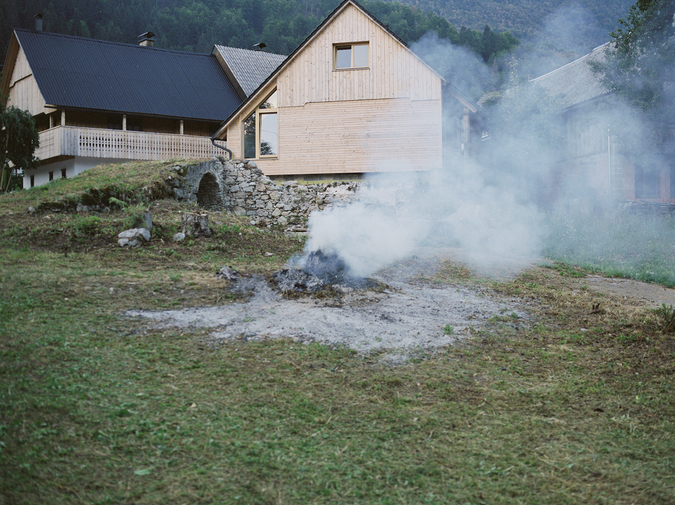 In August, I stood in the doorway, watching as a bounty hunter pressed her fingers deep into my flowerpot and told me about the vexing but ultimately successful capture of my husband.

“What I always say,” the bounty hunter said, “is that they can run but they can’t hide.” She pulled her fingers free and brought them to her lips. “This soil is dry.”

“It’s no skin off my nose.” The bounty hunter pointed at her actual nose, which was terribly sunburnt. “You should have your husband handle the watering. He could learn a thing or two about getting something wet.” She looked down at him—he who was in a prayer position by her legs—and flicked his ear. I reddened, wondering what she knew of his prowess. Perhaps, on their way here, they’d pulled over to fornicate. It was something I’d seen happen in the movies. I’d have been jealous if things were different; as it stood, though, the man on his knees, the one with the widow’s peak and the suit dusty with sand—he was not my husband.

“I don’t know this person,” I told the bounty hunter for a third time.

“It’s an intriguing idea, Amy, but I won’t bite. Five months ago we sat on your couch and you cried and gave me photos and put out the hit with a not insubstantial deposit—the latter half of which, I’m required to remind you, is due now.”

I went inside for my checkbook, trying hard to remember any day that approximated the one the bounty hunter described. Maybe I was an amnesiac, the memory wrapped up in cloth. Maybe not. She got her money in either case.

What I remember of our first day is this: the house, with its open windows and nearness to the front range, became a sort of wind conduit, pulling warm pollen gusts through the rooms and making my eyes bleary with tears; the man, seeing these tears, anguished and apologized for a litany of misdeeds unfamiliar to me; the evening, blue-lit and chilled, went to amendment efforts: the man scrubbed the bathtub; the man kissed my feet; the man made a pasta rich with garlic and cream; later, in the bedroom, he insisted that I seize pleasure however I saw fit; I remember him on the floor, prostrate; I remember him suggesting I sit on his face.

I did not accept all of the man’s offers, but I did accept many of them. If given more change than they are owed, some people will hand it back while others will walk away, knowing that accidental riches are not easy to come by. That day, I decided to postpone the untangling of the mystery for a later time. I decided, in a phrase, to relax and rejoice.

I awoke in pre-dawn to the man’s snoring. Instantly, the predicament was appalling to me. I was not a married woman whose husband had left and then been returned by a bounty hunter; I was a single woman who, until yesterday, had been living alone quite happily. The prior day, with all of its undue pampering and preening, embarrassed me now. How could I have let a stranger work so hard to repair something he hadn’t damaged? Perhaps his actual wife was sitting alone in a house at this very moment, waiting. Perhaps she was much worse off than me.

“Wake up,” I said, poking the man’s hairless stomach. “You have to leave.”

He had no waking process, just opened his eyes and spoke. “Darling,” he said, “I’m in it for the long haul. We’re going to make it work. This is the only home I’ve ever known. I can feel your heart beating at the center of mine.”

It was a strange list of platitudes, yet I found myself moved. My poking evolved into a kind of stroke. “Why did you leave me?” I asked, genuinely curious.

“You know why, ducky.” He patted my hand and was soon snoring again.

Thus began seven months of this kind of back and forth. At any given moment, I could be my old self—longing for solitude, baffled by the presence of this person in my house—or my new self, who had loved and been abandoned by my husband. For a time, the latter feelings had to be pretended at, but eventually they became authentic. Life has a way of doing this.

Given the nature of his arrival, it was no real surprise when the man left. “I’m leaving you,” he said that day. We’d just finished lunch. He walked, for reasons unknown, out the back.

I stood in the living room wondering how I should feel now. In my confusion, I called the bounty hunter, whose card had been behind the license in my wallet since she first arrived.

“You can’t keep a runner from running,” she said.

This struck me as true, and I told her as much.

“Do you want me to find him?” she asked.

I knew she was chewing bubblegum from the way she talked. My mouth watered at the remembrance of my childhood, which suddenly seemed so far away. “No thanks,” I said. “But can I ask where you found him last time?”

“Sure I can. He was walking through a stretch of sagebrush between Castle Rock and Colorado Springs. Mile marker 72, I believe.”

We hung up. For a few days, I held the vision of him wandering that place whenever I felt panic knocking at my edges, threatening to bring me to my knees.

Soon, this need left, too.

It was March. I was happy.

Scott Broker is a queer writer currently based in Columbus, Ohio. His stories and essays have appeared in or are soon forthcoming in The Rumpus, Passages North, DIAGRAM, The Masters Review, and Sonora Review, among others. He can be found at www.scottjbroker.com.